Skip to content
IoT Solutions to Protect Athletes From Injury

Whether you’re into watching homeruns, slam dunks, touchdowns, goals or moving your head from left to right in anticipation of scoring love (tennis, talking about tennis), many of us live for sports.

Sports are America’s past time. They are a chance to take a break from the boss breathing down your neck, the kids crying for more cheerios and the constant voice in your head nagging you to eat better, exercise more and call your mom more often. Sometimes we just need a moment to scream at the TV and jump around as if our pants were on fire! That’s what sports are for! Yet when you hear reports of football players killing themselves because of long-term brain damage due to CTE (chronic traumatic encephalopathy), an injury caused by multiple small concussions over time, suddenly making that phone call to mom feels like the better thing to do. 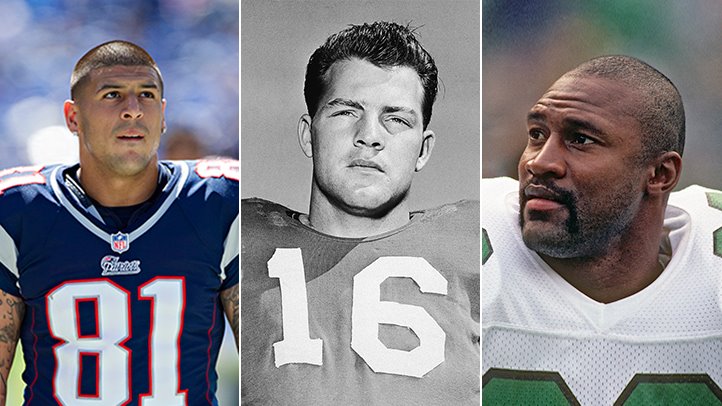 (From left to right): NFL players Aaron Hernandez, Frand Gifford, and Andre Waters are a few examples of CTE-diagnosed athletes. Photo and information courtesy of Everydayhealth.com.

What’s comforting to know as sports fans is that there are now IoT wearables, sensors and other smart products out there that can help prevent serious sports-related injuries such as CTE.

Why We Need Smart Helmets

Part of what makes sports exciting to watch is that there is a risk factor involved. Power, agility, technique, strategy and ability are all things that we watch for while holding our breath for that swish, juke or catch. “OOOOO!” we scream when we see a player crushed, tackled or hit by a fastball at 100 mph. Sure, injury is a part of being an athlete, but does it have to ruin their lives forever once they’ve retired?

The history of helmet technology is short and it wasn’t until very recently that IoT product design began playing a major role in sports safety. Football has been around since the mid-1800s, but helmets weren’t even used until the early 1900s. Plastic helmets weren’t introduced until the 1940s. Despite the overwhelming evidence of fatalities due to concussions suffered on the football field, it wasn’t until neuropathologist, Dr. Bennet Omalu discovered CTE in 2002, that developers started to take a closer look at using technology to increase helmet safety.

Thanks to Dr. Omalu’s work, changes are being made to prevent head injuries in football with the help of IoT. Riddell now makes a smart helmet that can monitor the force and number of impacts to the head. With this information, coaches can tweak their practices to avoid drills that have a higher potential of causing concussions. They can also look at head impact analytics of individual players to determine if they need to adjust their time on the field. This is particularly important for long-time players or those who play positions that have higher potential for concussions to occur. With the help of IoT sensors embedded in helmets, football is likely to become a safer and more enjoyable game to watch.

There are other IoT devices that can help prevent CTE. As mentioned earlier, CTE is caused by smaller, less detectable concussions that cause damage to the brain over time. It’s important to detect whether or not players have suffered from one of these less obvious concussions. FITGaurd, a mouthguard equipped with IoT sensors, detects these smaller head traumas. Coaches and parents can use FitGaurd’s analytics to determine whether or not they need to follow concussion protocol.

The Riddell InSite Training Tool gives insight on impacts to the player’s body, and coaching analytics. Photo courtesy of Sporttechie.

Other IoT Wearables For Athletes

While there is a myriad of IoT wearables that can help athletes improve their performance, there are some that can help prevent minor injuries like ankle sprains, tendon tears, and plantar fasciitis. The Sensoria Smart Sock, for example, can help runners detect whether they run with an injury-prone gait and help them to correct it.

Sensoria has a plethora of smart training apparel amongst their socks.

Catapult is another example that offers an athlete management software accompanied by an IoT wearable to provide analytics that can help to increase athletic performance while minimizing risk of injury. Catapult’s mission is to “equip teams with the tools required to make informed performance decisions.” The company has many products, and will be releasing a new device, Catapult Vector.

There will always be a risk factor in every sport whether it be high, in the case of helicopter skiing, or something as seemingly safe as swimming (hey, those swimming caps are tight!). Luckily, with the help of IoT wearables and sensors, there’s hope that we can make all sports a little safer.